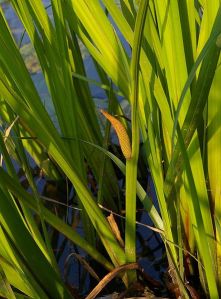 Collective Fallout is pleased to announce the First Calamus Prize for Queer Speculative Poetry.  First prize is $50 and publication in the January 2012 issue of the magazine.  Finalists will also be published in the January and July 2012 issues.  The reading period for this contest begins August 1st, 2011.  Complete details can be found on our Contests page.

Calamus, or Kalamos, was a figure from Greek mythology.  When his friend Karpos (son of spring and the west wind) drowned in the Maeander River while the two were swimming in a competition, Kalamos allowed himself to die as well.  He was transformed into a water reed; as the wind blew across the reed, his sighs of grief could be heard.  He gives his name to a specific species of wetland flowering plant (also known as sweet flag), which has become a symbol of love — partly for its phallic shape, and possibly because of its psychotropic properties.

Walt Whitman included a section called “Calamus” in the 1860 edition of Leaves of Grass. This sequence of poems homoerotically celebrates the “manly love of comrades.”  It is for the Whitman poems and the transfigured lover that this contest is named.  The following poem is Whitman’s: